Examples of radiographs used in this study: weightbearing anteroposterior (A) and lateral/medial oblique (B) views of the left foot. 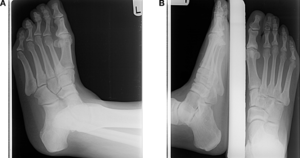 Twenty-one plain radiograph sets were presented to ten American College of Foot and Ankle Surgeons board-certified foot and ankle surgeons. Each physician classified each radiograph based on clinical experience and knowledge according to the Regnauld, Roukis, and Hattrup and Johnson classification systems. The two-way mixed single-measure consistency intraclass correlation coefficient was used to calculate intrarater and interrater reliabilities.

Twenty-one plain radiograph sets were presented to ten American College of Foot and Ankle Surgeons board-certified foot and ankle surgeons. Each physician classified each radiograph based on clinical experience and knowledge according to the Regnauld, Roukis, and Hattrup and Johnson classification systems. The two-way mixed single-measure consistency intraclass correlation coefficient was used to calculate intrarater and interrater reliabilities.

Hallux limitus and hallux rigidus are two of the most common pathologic disorders facing podiatric physicians, affecting 2.5% of the adult population.1 Hallux limitus is an arthritic condition causing decreased motion at the first metatarsophalangeal joint, which tends to be more frequent in men and with 44% of affected patients older than 80 years. The decrease in sagittal plane motion leads to pain, stiffness, and gait disturbances.2,3 The condition is progressive and oftentimes results in hallux rigidus, a complete lack of motion at the first metatarsophalangeal joint. Although there does not seem to be one underlying cause of hallux limitus, it can be thought to result from hypermobility of the first ray, pes planus, a long first metatarsal, primus elevatus, iatrogenous complications, inflammatory diseases such as gout and rheumatoid arthritis, and genetics.2,4,5

We selected the Regnauld, Roukis, and Hattrup and Johnson hallux rigidus classification systems for study (Table 1). Twenty-one plain radiograph sets (three radiograph packets with each packet containing seven sets of radiographs) of the foot were randomly selected from physicians' electronic systems based on the presence of hallux limitus deformity. Three standard views were selected and provided per set (weightbearing anteroposterior, medial oblique, and lateral) (Fig. 1). Each radiograph packet contained the same seven sets of radiographs with one of the three classification systems attached.

Ten American College of Foot and Ankle Surgeons (ACFAS) board-certified foot and ankle surgeons were instructed to objectively classify each packet of radiographs according to its assigned classification system based on their clinical experience and knowledge. The surgeons were randomly selected. A handout of the instructions was given to each physician. This process was repeated with each individual physician three times to determine whether each physician classified each set of radiographs consistently and to eliminate potential bias. All of the surgeons were familiar with the Regnauld, Roukis, and Hattrup and Johnson classification systems (Table 1).

Physician intrarater and interrater reliabilities were assessed based on the two-way mixed single-measure consistency intraclass correlation coefficient (ICC).14,15 The ICC provides a measure of the proportion of reliable variance and typically ranges between 0 and 1.15 Specifically, ICC[3,1] and ICC[3,k] are reported. The ICC was interpreted based on guidelines for reliability provided by Fleiss16: less than 0.40, poor reliability; 0.40 to 0.75, fair to good reliability; and greater than 0.75, excellent reliability. Analyses were conducted using R version 3.1.3 (Vienna, Austria).12-14

The classification systems evaluated herein are useful for grading the severity of hallux rigidus and for directing treatment or evaluating prognosis. For example, a Roukis grade I would lead to either conservative treatment or a cheilectomy, Watermann, or Youngswick-Austin procedure, and a Roukis grade IV would lead more to an implant versus arthrodesis.12,19 Conservative treatments for hallux rigidus include icing, nonsteroidal therapy, shoe modification, corticosteroid injections, physical therapy, and orthotic devices.18 The goal for surgical treatment is to relieve pain and ensure mobility of the first metatarsophalangeal joint. The present study offers the first quantitative comparison of the relative strengths of the classification systems based on interrater and intrarater reliability. This information can be useful in determining the plan and treatment that an individual needs based on the level of severity.

Limitations of this study include the relatively small number of observers and radiographs used. Future research using larger sample sizes may be useful to validate the conclusions identified herein. In addition, in the present study we focus on the Roukis, Regnauld, and Hattrup and Johnson classification systems. These particular systems were chosen due to their widespread use. However, other classification systems, such as Hanft, Coughlin, Drag, Oloff, and Jacobs, may be useful to be evaluated in context.20,21

Copy this link, or click below to email it to a friend
Email this content
or copy the link directly:
The link was not copied. Your current browser may not support copying via this button.
Link copied successfully