Determination of the hallux valgus angle. 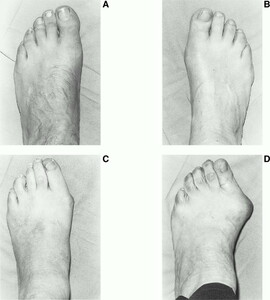 The Grading of Hallux Valgus

This article describes a new, noninvasive method of assessing the severity of hallux valgus deformity by means of a set of standardized photographs. Six podiatrists were independently asked to grade the level of deformity of 13 subjects (26 feet) on a scale of 1 (no deformity) to 4 (severe deformity). The reliability of the four-point scale for the severity of hallux valgus was investigated by means of kappa-type statistics for more than two raters. The results showed that the grading method had excellent interobserver repeatability with a combined kappa-type statistic of 0.86, making it a suitable instrument for clinical and research purposes. (J Am Podiatr Med Assoc 91(2): 74-78, 2001)

This article describes a new, noninvasive method of assessing the severity of hallux valgus deformity by means of a set of standardized photographs. Six podiatrists were independently asked to grade the level of deformity of 13 subjects (26 feet) on a scale of 1 (no deformity) to 4 (severe deformity). The reliability of the four-point scale for the severity of hallux valgus was investigated by means of kappa-type statistics for more than two raters. The results showed that the grading method had excellent interobserver repeatability with a combined kappa-type statistic of 0.86, making it a suitable instrument for clinical and research purposes. (J Am Podiatr Med Assoc 91(2): 74-78, 2001)

Hallux valgus is possibly the most instantly recognizable deformity of the foot. The term is used to describe a lateral deviation of the great toe away from the midline of the body. In cases where external rotation of the great toe relative to the first metatarsal bone accompanies the deformity, the term “hallux abducto valgus” is preferred.1 Etiologic factors that have been implicated in the development of the deformity include anatomical variations in bone structure,2 abnormal lower-limb biomechanics,3 and footwear.4 The development and progression of the deformity is more likely due to a combination of factors rather than any single one. Radiographically, the hallux valgus angle is calculated by measuring the angle formed by lines drawn to bisect the first metatarsal bone and the proximal phalanx of the great toe (Fig. 1). Because a slight deviation of the great toe is normal, a diagnosis of the deformity is usually reserved for patients with a hallux valgus angle of more than 15°.5 Kelikian6 suggested that a measurement of 20° should be considered a mild deformity, 30° a moderate deformity, and more than 40° a severe deformity. Other grading systems have referred not only to deviation of the hallux with respect to the first metatarsal but also to external rotation of the proximal phalanx and degenerative changes within the joint.7-9

Previous studies have consistently reported that the disorder is more common in females than in males.10, 11 This finding may be inaccurate, as the results of those studies were based on relatively small numbers of observations made in a clinical setting with highly selected populations. Women between the ages of 15 and 64 are known to consult with their general practitioners more often than men and are more likely to be referred to a hospital specialist.12 In addition, data obtained from a clinical environment will represent a range of deformities and complications that are considered to be of sufficient severity to warrant some kind of medical or surgical intervention. Many people with hallux valgus will remain completely asymptomatic throughout their lives; for those who develop problems, the severity of symptoms will not always mirror the level of structural deformity present.5, 13

The true prevalence of hallux valgus in the general population remains unknown, as ethical and practical considerations preclude the use of serial radiographs in an otherwise healthy population. Alternative, noninvasive methods using outline drawings of the feet,14 goniometers,15 and modified shoe gauges16 have been tried, but the validity of these techniques has been questioned.17, 18 Very little, therefore, is known about the natural history of the complaint, when it first occurs, the speed of progression, and the factors that determine outcomes. These deficiencies could be addressed by the production and use of a simple, valid, and noninvasive method of charting the presence, severity, and progression of the deformity.

This article describes the development and validation of a series of photographs designed to help grade the level of hallux valgus deformity (the Manchester scale). The use of photographs as a means of grading the severity of disorders is well established, particularly in optometry. For example, the amount of inflammation that has developed in the eye as a complication of wearing contact lenses is assessed using a standardized series of illustrations.19, 20 Graded photographs have also proven to be a reliable and valid method of screening for early signs of glaucoma. A similar technique for assessing hallux valgus would prove useful both in clinical practice and in population studies.

The first stage in the development of the instrument to be used to measure hallux valgus was to assemble a series of photographs thought to be broadly representative of the different stages of the deformity. Eleven volunteer patients (22 feet), with and without great toe deformity, were recruited from the Department of Podiatry at the University of Salford. A set of standardized, nonweightbearing photographs was taken of the feet; each photograph was randomly assigned a number from 1 to 22. The grading photographs were ultimately chosen from this collection.

Twelve podiatrists from northwestern England with varying degrees of clinical experience participated in the study. Each podiatrist was asked to grade the 22 photographs according to the level of deformity present under one of four headings: no deformity, mild deformity, moderate deformity, and severe deformity. The assessments were completed anonymously and returned for analysis. The objective of this process was to determine whether a consensus could be reached on a single photograph for each grade of deformity.

To validate the four graded photographs chosen, the second stage of this study was designed to assess interobserver agreement. A further group of 13 patient volunteers attending an outpatient podiatric clinic in a local general hospital was recruited. These patients were also chosen to represent a range of hallux valgus deformity. Each patient was assigned a number randomly to determine the order of examination. A total of six podiatrists, all employees of a local health authority, were then asked to inspect each foot of the patient in turn and grade them from 1 to 4 using the four “standard” photographs. The podiatrists were advised that only one grade could be recorded and that in-between gradings, such as 2/3, were unacceptable. In the analysis, a kappa-type statistic (κ??was calculated to determine the level of interobserver agreement over and above what would be expected by chance. Such statistics range from 0 (no agreement) to 1 (complete agreement).

The reliability of the four-point scale for the severity of hallux valgus was investigated by means of a kappa-type statistic (κ? for more than two raters. This method was originally proposed for binary data by Kraemer21 and was further developed for use with ordered categorical scales by Roberts.22 It is based on a one-way random effects model with ratings for each subject considered to be exchangeable. An overall κ statistic is obtained; in addition, interclass κ statistics can also be derived that indicate the level of disagreement between individual categories. Estimates of the standard error of the κ statistics were obtained using a jack-knife technique to calculate 95% confidence intervals (CIs) for the point estimates. Kappa-type point estimates and CIs were calculated using a program written by Roberts for use in the STATA statistical software package (STATA Corp, College Station, Texas).

There was complete agreement among the podiatrists regarding which patients had grade 1 (no deformity) and grade 4 (severe deformity), and there was modest disagreement between observers as to whether the deformity was grade 2 or grade 3. Agreement was similar for the right feet (κ = 0.88; 95% CI, 0.77–0.99) and the left feet (κ = 0.84; 95% CI, 0.70–0.97), with the overall level of agreement for both feet of κ = 0.86 (95% CI, 0.78–0.94) indicating a high level of agreement among the six podiatrists. Further analysis of the interobserver agreement is shown in Table 1. The podiatrists had little difficulty distinguishing between severe and moderate deformity (κ = 0.79) and between moderate and mild deformity (κ = 0.79). The lowest statistic (although it was still high) was 0.67, indicating slight confusion between grade 1 and grade 2 deformity.

Many clinicians use the terms “mild,” “moderate,” and “severe” to classify the severity of hallux valgus deformity. This method is unsatisfactory, particularly for research purposes, because any classification that is based on clinical assessment alone is likely to suffer from poor inter- and intraobserver repeatability. Although goniometers are commonly used for assessing joint range of motion, caution is required when using this instrument for measuring joint angles because derived measures can easily be affected by the presence of swelling, the position of the goniometer arms, and the skill of the operator. Even when angle measurements are taken from standard radiographs, measurement errors of 5° have been recorded.23

A grading method that is based on matching a set of standardized photographs to the deformity has a number of advantages. First, the technique requires a minimum of skill and is, therefore, easy to learn. Second, the use of a standardized method will enable the progress of the deformity to be recorded prospectively and allow the results of similar research studies to be compared. Finally, because it is completely noninvasive, the technique can be used to obtain data from the general population, thus allowing the true prevalence of hallux valgus deformity to be determined.

The Manchester scale was developed for use in a cross-sectional survey of disabling foot pain. Its use will allow the prevalence of hallux valgus—and, thus, the future demand for foot health-care services—to be established. Use of this scale will also allow investigation of the etiology of the condition and exploration of its relationship to localized pain and disability. In a clinical setting, the grading scale can be used at the initial assessment of patients to record the extent of hallux valgus prior to the onset of symptoms. It will also show if the development of symptoms is related to an increase in the hallux valgus angle. Wider use of the scale would also lead to better communication among practitioners.

The results of this study show that the authors’ proposed grading method has excellent interobserver repeatability. The greatest confusion noted among observers—between grades 1 and 2 and grades 2 and 3—may reflect differences in the clinicians’ perceptions of hallux valgus deformity. Nevertheless, the lowest κ value of 0.67 is generally considered to represent a good level of agreement.24 With a combined κ of 0.86, there is little doubt about the repeatability of the technique. Only when more data on hallux valgus become available will clinicians begin to have a better understanding of the natural history of this deformity. Further use of the scale will allow comparisons to be made between patients presenting for surgery and people taken from the general population. This may eventually provide some clues as to why some people develop complications from the deformity while others remain entirely symptom-free.

Copy this link, or click below to email it to a friend
Email this content
or copy the link directly:
The link was not copied. Your current browser may not support copying via this button.
Link copied successfully